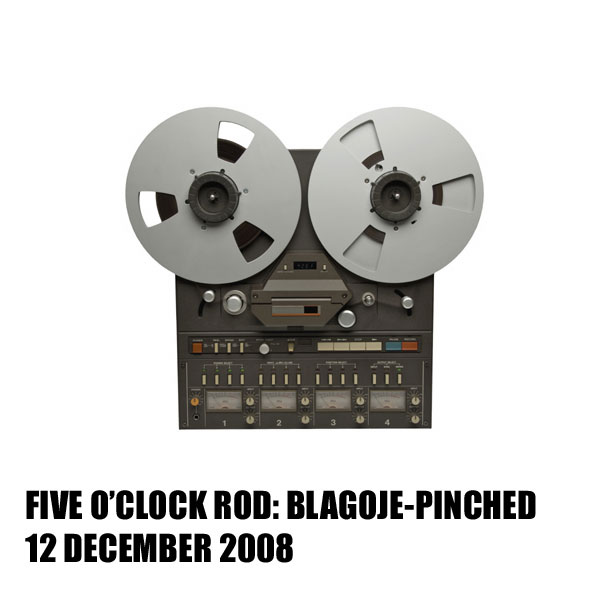 This Friday's Mix: Blagoje-pinched
Posted by Jason around 11:54 2 comments:

Special, special, what do you get? Another year older and deeper in debt.

This Friday's Mix: 38 Special
Posted by Jason around 15:05 No comments:

Labels: fiveoclockrock, music, playlist
This Quadrennium's Five O'Clock Barack Thanks, everybody. It's just what I wanted. You're all right.

Now listen, America. You know my birthday's coming up. You manage to show up every four years or so, making a big deal about the effort you put out in merely showing up at all. I'm not a gift-centered person by any means, and I'm always glad to see you. In fact, I hope we see each other more often. It might help things.

But, frankly, when you do show up, what you bring me has generally been crap.

And let's not talk about the past two times. I can't even Freecycle that shit away.

This time I know I might be asking for a lot. It's not the store where you've shopped your entire life. There might not be parking. It's probably going to take a while to check out. A long-ass while. Maybe you're not entirely sure what it is you'll be taking home.

But just this once. Come on. Trust me. It's going to be worth it.
Posted by Jason around 07:07 No comments:

Don't let the rock hit you where the good lord split you.

This Friday's Mix: The Doors
Posted by Jason around 15:41 1 comment:

Dominick Dunne is in the hospital after being stricken with pain as he watched testimony in the O.J. Simpson robbery & kidnapping trail. Preliminary tests were inconclusive, but doctors haven't ruled out his nearly severed head.

Wall Street extended a huge rally Friday as investors stormed back into the market, relieved that the government plans to restore calm to the financial system by rescuing banks from billions of dollars in bad debt.

And we were all very sorry, and we learned our lesson, and the bad thing never happened again. The end.
Posted by Jason around 15:48 No comments:

"Obama was referring to Gov. Sarah Palin ... Who has been talking about lipstick lately? It was obvious."
-- McCain campaign spokesman Brian Rogers

"She likes wearin' lipstick, she likes French cuisine, but she won't let me use my passion unless it's in a limousine. She got me under pressure."
-- ZZ Top, "Got Me Under Pressure"

Today's FOCR: "Got Me Under Pressure," ZZ Top, Eliminator
Posted by Jason around 21:55 No comments:

How hot is my life these days? Check out the On Demand options I perused this weekend.
Aw, yeah.

Then I made sure I hadn't mistakenly left the Caillou section of On Demand. Nope. I dialed up an episode; I don't remember which one. It's when Caillou whines and has feelings about stuff. You know the one?

Once it was rolling, I sat back and took myself to that place parents go when they have no book or notebook or internets, but still opt to listen to the low hum in the back of their heads rather than watch the children's show in front of them.

Now re-read this post in your best Barry White voice. Aw, yeah.
Posted by Jason around 07:38 No comments:

Isaac Hayes has made his exit. Here he is, making one of the best entrances ever.

So badass, he can enter draped in one of my grandmother's quilts and make it look good.

Whatever went on between him and South Park, it's hard to believe he deserved the sendoff they gave him. Sad that this episode has been by rote included in his obits, regardless of their length. Do yourself a favor: watch Wattstax and Respect Yourself and see more to the man than that.

Posted by Jason around 17:56 No comments:

So many -ates. Just a little late.

This Friday's Mix: Oh, Eight
Posted by Jason around 18:22 No comments:

This Friday's Mix: Hughes' Next
Posted by Jason around 04:38 No comments:

This Friday's Mix: Hughes in Review
Posted by Jason around 07:11 3 comments:


So That's What's Been Bothering Me

Man, now I feel like a jerk.
Posted by Jason around 09:30 No comments:

Swiss chemist and psychedelic pioneer Albert Hoffman, who inadvertently discovered the hallucinogenic properties of LSD and first tested them on himself, died Tuesday. His face fucking melted off, man. He was 102.
Posted by Jason around 23:43 No comments:

Safety glasses required in this area.

This Friday's Mix: Science!
Posted by Jason around 11:13 1 comment:

This Friday's Mix: No Two Alike
Posted by Jason around 16:57 No comments:

Nothing contributes so much to tranquilize the mind as a steady purpose—a point on which the soul may fix its intellectual eye.
-- Mary "Wollstonecraft" Shelley, Frankenstein

This Friday's Mix: The Pipes Are Calling
Posted by Jason around 12:00 No comments:

This Friday's Mix: Abraham Linkage
Posted by Jason around 13:19 No comments:


Hanging In and Jiving

While we lost the singer of the "Maude" theme song some time ago, WNYC's "Soundcheck" recently reassured us that the theme's writer is still kicking. To my mind, the man did more for Lady Godiva than chocolate.

Speaking of She Who Shall Not Be Tranquilizin', check out The Beachwood Reporter's celebration of 35 years of "Maude."

By the way, the 35th anniversary gift is jade, and "jade" can also be defined as "a bad-tempered or disreputable woman."

[PINKY TO CHIN, COYLY] Oh, did I just blow your mind?

Posted by Jason around 13:49 No comments:

This Friday's Mix: Mardi Gras
Posted by Jason around 15:00 No comments:

This Friday's Mix: Name Checking
Posted by Jason around 09:48 No comments:


...But I Heard the Hook Was on His Foot

One more strike against everything I learned on the playground.

I always thought that Van Halen was famous for requiring their backstage bowls of M&Ms be filled only with green ones, due to their purported aphrodisiac qualities.

Turns out, idiot, the backstage rider wasn't "all green ones," but rather "no brown ones." And the reason, at least according to Diamond Dave, was a totally practical one having nothing to do with making Teacher hot(ter).

Perhaps it's time to revisit my phobia of eating KFC at the drive-in.


The 7 Habits and/or Toiletries* of Highly Effective People

* As evidenced by the briefcase left on our garbage cans.