A little something for your yearhole.

Intro
Heretics / Andrew Bird
Here Comes the Rain / The Ladybug Transistor
Mistaken For Strangers / The National
Mutiny, I Promise You / The New Pornographers
A Hand to Take Hold of the Scene / Okkervil River
Up On Crutches / The Sea And Cake
Party / El Perro Del Mar
How Dark Is Your Dark Side / His Name Is Alive
Lord, Let Us Shine / The Pink Mountaintops
Eyes On The Prize / Mavis Staples
How Long Do I Have To Wait For You? / Sharon Jones and the Dap-Kings
Deep In The Sand / The Budos Band
Way Back When / Buck 65
Oh Katrina / Anders Osborne
Shake It Off / Wilco

This Friday's Mix: Ear in Review
(Yes, some are older than 2007. Never was accused of being overly up-to-the-minute.)
Posted by Jason around 17:00 No comments:

Intro
The Day I Tried to Live / Soundgarden
Today / Smashing Pumpkins
The Day that Curly Billy Shot Down Crazy Sam McGee / The Hollies
The Night Chicago Died / Paper Lace
Turn-Down Day / The Cyrkle
Tuesday, Oct. 24th / Clem Snide
A Big Day In The North / Black Grape
Papa Was a Rolling Stone / The Pioneers
The Night The Lights Went Out In Georgia / Vicki Lawrence
December 1963 (Oh, What A Night) / Frankie Valli And The Four Seasons
Saturday In the Park / Chicago
Such A Night / Clyde McPhatter & The Drifters
The Night They Drove Old Dixie Down / Joan Baez
The Day They Sold Beer In Church / Norman Greenbaum
Nobody Told Me / John Lennon
Eve Of Destruction / Barry McGuire

Okay, this takes some background.

Way back, there was this scene that my friend Kit and I always talked about putting into a screenplay. It was basically a real conversation of ours. The scene would have gone something like this:

INT. CAR
J is driving. KIT is shotgun. On the radio, Sam Cooke's "What a Wonderful World" is in its final chorus.
KIT: What a perfect song. Just perfect. Sam Cooke, right?
J: Yep.
KIT: Man, whatever happened to him?
J: He was shot outside a motel office, wearing nothing but a trenchcoat.
KIT: JESUS. Really?
J: Mmm-hmm.
On the radio, Marvin Gaye's "What's Going On" begins to play.
KIT: Nothing bad happened to Marvin Gaye, did it?
J: Shot.
KIT: Damn.
J: By his own father.
KIT: Fuck!
KIT reaches over and turns the radio dial.
KIT: Them?
J: Singer, car crash.
KIT changes the dial again.
J: Car.
Again.
J: Car.
Again.
J: Plane.
Again.
J: Drowned.
Again.
J: Can't remember. Something with vomit.
Again.
J: Drowned in vomit.
KIT turns off the radio.
KIT: Okay. The one song that will cheer me up, no matter what's wrong. (INHALES) Please, please tell me that, somewhere, the theme-from-"Maude" guy is a fat happy grandpa.
J: Fell out a window.
There is silence.
KIT: (POINTS) That bar up there.
J: Sounds good.
EXT. CAR
The car exits the freeway.
KIT: But then we're sleeping it off in the car.

Sorry. It's just been that sort of week. Not to mention how I felt myself age by writing that I have used a car radio with dials.

Intro
Big Houses / House Of Freaks
I'm Free Now / Morphine
#1 Hit Song / Minutemen
Ticket Tulane / Silkworm
Trouble / Little Feat
Ballad Of Big Nothing / Elliott Smith
Things Behind The Sun / Nick Drake
New Year's Prayer / Jeff Buckley
You And Your Sister / Chris Bell
That's Where It's At / Sam Cooke
When Did You Stop Loving Me, When Did I Stop Loving You / Marvin Gaye
You've Got A Friend / Donny Hathaway
I'll Have To Say I Love You In A Song / Jim Croce
Let's Get Lost / Chet Baker
Loving You / Minnie Riperton
Don't Cry / J Dilla

This Friday's Mix: Whatever Happened To?
Posted by J.D. around 16:58 No comments:


Do This, Don't Do That/Can't Yuu Read the Sign?


Word of the Week

I think Cousin Earl must have had me for Secret Hanta. I remember seeing him sneeze into the cider.

All the better to rock you.

This Friday's Mix: What Big Teeth
Posted by J.D. around 12:18 No comments:

This is something of a repeat, but it's new to the podcast. So don't drive yourself crazy asking which came first.

What do toddlers and job seekers have in common?

Making like a tree and getting out of here.

This Friday's Mix: That Is the Question
Posted by J.D. around 13:16 No comments:

Okay, so, I got an iPhone. I began the day of the price cuts swearing I'd never do it, but after five minutes of trying one out, I had to do it. It's the mapping. Maps and directions on demand are crucial for someone with a notoriously bad sense of direction like mine. I get lost constantly, but I can totally grasp where I should be if I can just see it. Now I'm totally set.

Unless I lose the iPhone.

Intro
I Got Kinda Lost / Chris Bell
Lost In the Supermarket / The Clash
Finding My Way / Rush
Can't Find My Way Home / Styx
There's No Way Out Of Here / David Gilmour
Is This Where? / Mission of Burma
Lost Highway / Hank Williams
Turn Around / Carl Perkins
Side O' The Road / Creedence Clearwater Revival
Too Late to Turn Back Now / Cornelius Brothers & Sister Rose
Will it Go 'Round In Circles / Billy Preston
A Place Nobody Can Find / Sam & Dave
There's A Break In The Road / Betty Harris
Love Map / Lyndon
Farther On Down The Road (You Will Accompany Me) / Taj Mahal
Where Could I Go But To The Lord / Jesse Fuller

This Friday's Mix: Summerly
Posted by J.D. around 00:57 No comments:


Worst-written Headline of the Day

Disappointingly, one reads on to find out that the Wimbledon champ was (a) not in a dogfight, and therefore (b) was not taking part in a dogfighting exhibition.
Posted by J.D. around 12:52 No comments:

This Friday's Mix: Yellowed VHS Cases
Posted by J.D. around 14:09 No comments:

Okay. So the Pistons beat the Bulls. But does Detroit have great music like--? Oh.

This Friday's Mix: D-fense!
* Yes, it's late. Yes, it's partly repurposed from the pre-podcast era. Thanks for asking!
Posted by J.D. around 15:51 No comments:

This one goes out to friends here from Amsterdam last week, and those who couldn't make the trip. Keep your fiets dry and your biertjes cold.

If you’d been wondering where the rock has been lately, the answer is three letters long.

Today's Five O'Clock Rock Why, yes, my refrigerator IS running. Why do you ask? 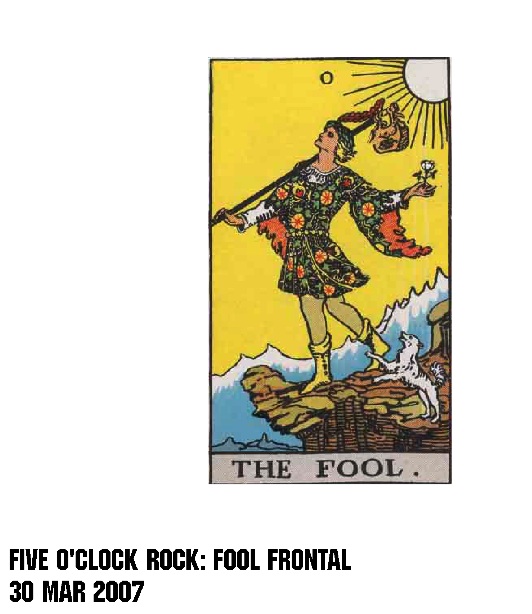 
It's everything they say. It also has its good points.


This Friday's Mix: Going Back to Cali

It may backfire, but will nevertheless aspire.

This Friday's Mix: The Ides of March
Posted by J.D. around 16:35 No comments:

More CDs from the depths of the trunk. Fewer apologies.

Except maybe for "Jump Around."

This Friday's Mix: Trunk Show
Posted by J.D. around 01:54 No comments:

If we're going to keep hanging out, there's something I need to tell you. I have a bit of a CD past.

A couple of weeks into ripping my CD collection, I have come up with a core sample from the very bottom of the trunk. They’re among the first I ever owned, in what could be called The BMG Years. The scuffed jewel cases are only vaguely transparent. Broken hinges outnumber the intact. Grease-pencil initials let you know just who’d come looking for this particular copy of “Cosmic Thing.”

Over the years, if I had to double-row CD cases on a bookshelf, these would go on the deep side. Yet I’ve never gotten rid of them. And when I began to spot-check them, I was not only still able to sing along, it was hard avoiding it.

Simultaneously embarrassing and reassuring, they still pull at me. Either they weren’t that bad to begin with or, at a minimum, they have held their dubious ground.

So here you go: me and what moved me, somewhere between 1989 and 1991, give or take. This indecent tracksposure is taken to its natural end: no song list. You'll have to invest the time for the right to mock. But you might not need it. Much.

This Friday's Mix: My Secret Shame
Posted by J.D. around 14:45 No comments:

"Please" is only the magic word if you already have what you want.

Oh, man. They all look so cool, jumping off that bridge...

This Friday's Mix: Everybody Everybody
Posted by J.D. around 17:01 No comments:

This will only hurt for 57 minutes.

This Friday's Mix: Doctor Doctor
Posted by J.D. around 13:20 No comments:

This Friday's iMix: All Saints Day
Posted by J.D. around 16:13 No comments:

Intro
Chest Fever / The Band
Hold Your Head Up / Argent
Magic Carpet Ride / Steppenwolf
Outa-Space / Billy Preston
Sabrosa / The Beastie Boys
Spanish Moon / Little Feat
The Only One I Know / The Charlatans UK
Clubland / Elvis Costello & The Attractions
No Atmosphere / A Band Of Bees
Chips Ahoy! / The Hold Steady
Hope You're Feeling Better / Santana
Time Is Tight / Booker T. & The MG's
I Me Mine / The Beatles
Don't Let Me Be Misunderstood / Joe Cocker
Don't Give Up on Me / Solomon Burke
Frank's Wild Years / Tom Waits

This Friday's Mix: Second Favorite Organ
Posted by J.D. around 10:00 No comments:

My New Year's resolution really ought to be about cutting back on last year's playlists.

Here's -- ahem -- another new-to-podcast mix, as a sign of solidarity with Rollie Fingers...

This Friday's Mix: Mustache Day
Posted by J.D. around 11:30 No comments: